Pickers on the way for Mildura accommodation hub 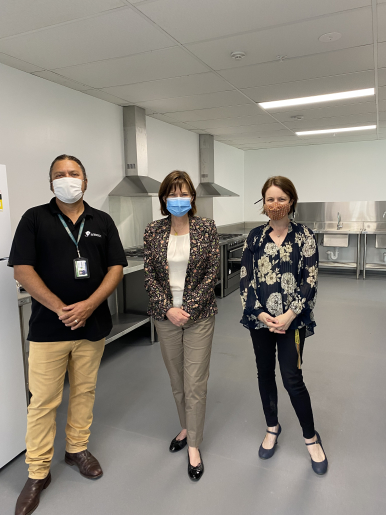 IT’S the quiet before the rush. The newly refurbished accommodation hub for seasonal workers in Mildura has opened and expects its first residents in the next month.

The new hub, west of Mildura’s CBD, will include 25 accommodation rooms and, with its communal kitchen and outdoor area, provide space for up to 56 seasonal workers ahead of January’s table-grape season.

Sunraysia Mallee Ethnic Communities Council (SMECC) pastoral care co-ordinator Corey Iredale said the hub was ready to go and it was “just a matter of people walking in the door and starting to live here”.

While no workers are yet on site, Mr Iredale said pickers were the “target market” and that SMECC had been in contact with Agriculture Victoria, the Australian Table Grape Growers Association and local employment contractors to secure residents for the five-month picking season.

“I’ll start to get them through the facility in the next week or two and that’s more than likely where our client base will come from.

“We know that people will come to town. There are a couple thousand people that have just finished up picking berries in Queensland and they’ll be here in the next month to six weeks.

“We need to be patient. And we need to be thankful for the funding we’ve received from the State Government to be able to do this. Because once word’s out, we know will be really busy.”

The new accommodation hub at Ramsay Court, a former health facility, was transformed after an $800,000 grant from the Victorian Government’s Building Works package.

The hub will be managed by SMECC, and will complement pilot accommodation sites developed in four regions across the state, including Robinvale, where a $500,000 investment was used to construct four houses for seasonal workers.

“We understand that access to housing for seasonal workers is a big issue for many communities, including here in Mildura – that’s why we are investing in important projects to provide solutions and boost employment,” Ms Thomas said.

Seasonal workers have the option of staying at backpackers hostels around town, but Mr Iredale said the new accommodation was designed to “get people out of congested, overpriced, unsafe housing” into a “safe and secure” location close to amenities.

“It’s a five-minute walk to the supermarket,” Mr Iredale said. “It’s close to every amenity that you need. We’re ready to accept people that are happy to move in.”