Mildura man finds his voice in a new community 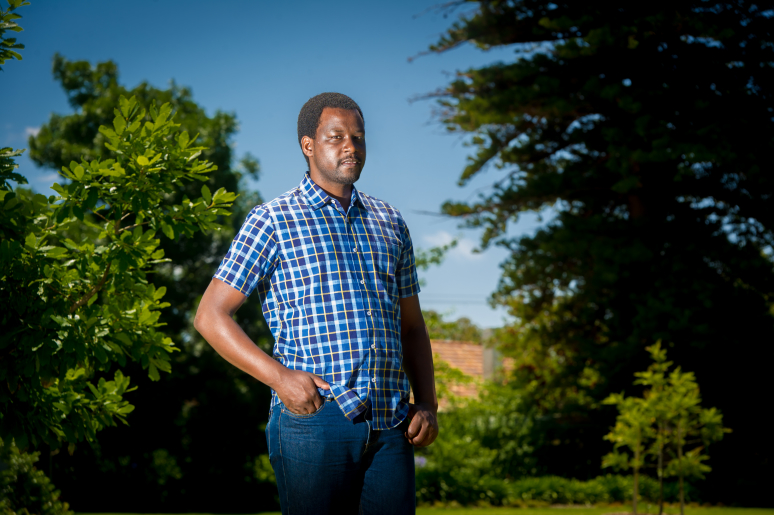 AFTER regaining his ability to walk so he could take himself to class, a Mildura man has been recognised for his efforts to overcome significant barriers to learning English.

Omer Ntunzwenimana, who has lived in Mildura for more than two years, was recently announced as one of four finalists for the Victorian Government’s Ro Allen Award, which recognises adult learners who have excelled in learning skills and become community role models.

When Mr Ntunzwenimana arrived in Mildura as a refugee in August 2018, he was unable to walk due to a bullet wound that prevented him bending his knee.

After an operation to repair ligament damage, the former Burundi man returned to Mildura, where over two months he went through rehabilitation and was able to relinquish his crutches.

Ever since, Mr Ntunzwenimana has walked a lot: to AMES Mildura, to TAFE, to study English, and, since January 2020, to Sunraysia Mallee Ethnic Communities Council (SMECC), where he joined the Conversation Cafe for English learners.

When Mr Ntunzwenimana, who spoke Kirundi and French in Burundi, first arrived at SMECC he felt nervous about not belonging.

“What if they didn’t understand me?” he said this week.

It was a detail that didn’t go unnoticed by SMECC cultural competency program co-ordinator Danielle Hren.

“He never smiled,” she said.

But he never missed Fridays, when the Conversation and Reading Cafe met between 11am and 3pm. Slowly, things changed.

“He started to smile, and he became so animated. He was so keen to work towards his goals,” Ms Hren said.

The cafe, which brought refugees and migrants from various backgrounds together with a wide mix of English-speakers from Mildura, helped Mr Ntunzwenimana to feel “confident” and apply for tertiary study.

Mr Ntunzwenimana has since been studying sociology at La Trobe University, and hopes one day he’ll be able to work for the United Nations and help his others in Burundi.

Ms Hren said Mr Ntunzwenimana deserved to be a finalist for the work ethic, resilience and gratitude he showed.

“He trusts that things will work out and when they start working out he’s super-grateful,” Ms Hren said.

The winner of the Ro Allen Award will be announced on December 10, a date Mr Ntunzwenimana has booked for a return to Melbourne.

But, after living with depression, he said he felt thankful to Ms Hren and the volunteers with whom he had found a new sense of belonging.

“(The cafe) helped me to feel involved. Meeting people gave me an opportunity to heal my mental health.

“Mildura is a new family for me.”