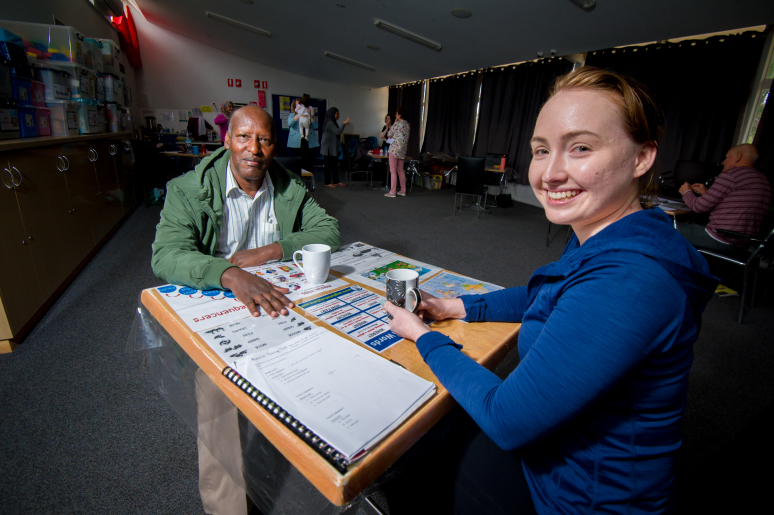 A MILDURA conversation class to help non-English speaking residents experiencing social isolation has just been recognised by the Victorian Government for its ability to bring people together during COVID-19.

The Conversation and Reading Cafe class, which runs every Friday between 11am and 3pm at Sunraysia Mallee Ethnic Communities Council (SMECC), has been named as one of four finalists for the 15th annual Victorian Learn Local Innovation Award, which recognises innovation in the adult community education sector.

The cafe brings together participants from various non-English speaking backgrounds to sit with volunteers at tables to talk in 10 to 12-minute sessions before changing partners.

“I’ve got truck drivers, I’ve had doctors, I’ve had physiotherapists,” Ms Hren said. “There is such a wealth of different experiences.”

The SMECC cafe was one of 25 finalists chosen from the 240 not-for-profit community organisations registered as Learn Local providers across Victoria.

While many community and educational organisations went to Zoom through COVID-19, Ms Hren said she listened to the concerns of her students and decided to come up with a more flexible learning approach.

“We’d be doing things like walking in pairs to the river, where we would change partners every corner. Or we would form essential services activity groups and we would meet at a supermarket to talk in pairs while shopping.”

The philosophy of the class, which began in January 2020, has been to allow attendees to talk without correction. Ms Hren said she had first experienced a cafe where experienced the concept while living in Shimizu, Japan. She said in the past two years several students had spoken about the confidence they gained to connect with strangers.

“It’s the best learning outcomes that I’ve seen in my 15-plus years of English teaching.”

Award winners will be announced a gala luncheon in Melbourne on December 10.