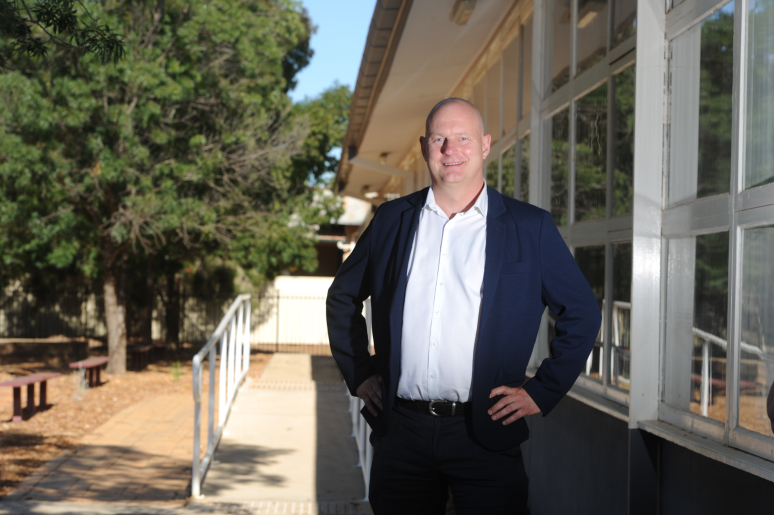 AN eye-opening travel experience, coupled with his work as a police sergeant in Mildura, has led Andrew Kilroy to his newest role as executive officer of Sunraysia Mallee Ethnic Communities Council.

Mr Kilroy started in the role last month, taking a break from his decade-long career with Victoria Police.

During extensive world travel, Mr Kilroy found one encounter 13 years ago put him in the shoes of people from Australia’s migrant and refugee communities.

“I found myself in China in 2009,” Mr Kilroy said. “I used to travel a lot through South-East Asia; most countries there you can speak English and you can get around no worries.

“But I went up to Guangzhou and got off the train and there was nothing in English at all.

“I got in a taxi and said, ‘The Park Hyatt Hotel please’, and he kicked me out because I didn’t speak any Chinese.

“For the next half-hour this anxiety that washed over me – that feeling I had of being a stranger in a town that I knew nothing about, I didn’t know how to get around and didn’t speak a lick of the language and couldn’t get my mobile to work.”

He said that short-lived experience was nothing compared to the feelings that many refugees and migrants deal with for weeks and months after settling in a new place.

“That’s why the work by SMECC and the crew here is so important to help that cohort navigate and assimilate in a new country.

“A lot come over as refugees and don’t know anyone so we put those connections together for them as much as we can.”

Mr Kilroy said since starting in the role, and in his previous dealings with SMECC while leading Mildura police’s community engagement unit, it was clear that two of the biggest issues faced by Sunraysia’s culturally and linguistically diverse (CALD) communities was access to translation and government services, including seemingly simple tasks such as going to a doctor.

He said SMECC’s outreach team did a lot of work assisting with important tasks such as setting up bank accounts, dealing with visas, enrolling children in cultural playgroups and providing English lessons.

“A large percentage of the CALD community are working on farms and on the land in those jobs that no one else wants.

“Our outreach team goes out and forms relationships with them and gives them a voice.

“We can take someone who has come to the country, we can help them with somewhere to live, find them English lessons, build the skills they need to enter the workforce.

“We’re really standing up for people so that they can stand up for themselves in this community.”

Mr Kilroy said his major goals for the not-for-profit organisation were to raise its profile in the community and make it more self-sufficient to ensure the services continued to be delivered.

“We rely heavily on government funding and are well supported by government, however it’s important to me that we take steps to become more self-reliant, and that means being smarter with some of the resources we have and building a business within a business, trying to generate our own income streams.”

Facing an expected influx of refugees from the Ukraine and Afghanistan in the near future, Mr Kilroy said it was also important that frontline staff were armed with the resources needed.

“Our intake of refugees will grow and we’ll get not only the primary migration, but the secondary.

“So people who are moving, perhaps from Melbourne or Sydney to a regional town, we’ll be helping them integrate as well.”

Mr Kilroy said while the role involved many moving parts, he had good support behind him and looked forward to its challenges.

“It’s a big job but the team is amazing, the work they’re doing is amazing. I love the positive aspects of what we do here and the impact that we have.

“It makes me smile every single day. That side of things is wonderful.

“But the nature of a not-for profit organisation is that it’s always reliant on community and government assistance so we’re always calling for volunteers or donations.”